Last week was an interesting one, full of SUN. Join me as I revisit my very eventful days.

Day 5 (October 15th) – Since the CO fall season has decided to rock average tempratures somewhere between the high 70s and the low 80s, D and I have decided to go outside as much as possible. Given the fact that the Cherry Creek Trail is so easily accessible from pretty much anywhere in the city, and our lack of desire to drive all the way to the mountains was bigger than our love of fall, we opted for the local scenery.

The plan was to find a rental bike for D, somewhere in the vicinity of R.E.I., and ride our bikes down the trail all the way to Cherry Creek Mall and back. I was bummed when we couldn’t find her a rental as close to R.E.I. as we’d hoped, so we decided to walk it instead. I honestly don’t know what drove me to think that we could easily walk from Platte Street to Cherry Creek Mall and back on our first try. After an hour of walking, I was feeling a little winded and had only made it as far as Grant Street. At that point, I told to D I thought it better to start walking back, all the while thinking that I was being a wimp for saying so.

That’s when we both started to get really, really tired. I was bloated and exhausted from the exercise, the heat, and the state of dehydration I was in.  If you’ve been reading, you know water intake is another thing I struggle with. My hands were so bloated from water retention, they looked like they were going to burst. Still, we pushed on and finally made it back to the car. Our little adventure lasted just over two hours, and we walked for 5.2 miles, or 13,138 steps.

Of course, I was so tired by the end that I wasn’t able to complete the challenge that day or the day after.

Day 8th (October 18th) – The Universe was working its magic on this day. Stress at work has been getting the best of me over the past 7 weeks or so, and I’ve been having a hard time finding my center. It’s been so bad that it’s interfering with other areas in my personal life, including this new coaching program I just started. When I told my coach I hadn’t been able to focus on the “homework” she’d given me, she immediately insisted on scheduling a phone call for what she called a ‘reset’. During the call, she told me that, if nothing else, I should work on my earthing and sun gazing to help ground myself.

We ended the call and I went home to complete the video routine for the day. I laughed out loud, and then smiled from within, when I hit play and heard Betty’s plan for the day: a full session of yoga stretch, focusing only on numerous sun salutations, downward facing dogs, and a breathing exercise. It was just what the Universe and the doctor had ordered.

Day 9th (October 19th) – In the fall of 2013, my brother’s wife was pregnant with my youngest nephew. I decided back then that there was no way this baby boy would learn how to ride a bike before I did, so I asked my brother to teach me. And I learned. Sort of.

If you’re laughing at me right now and wondering how a grown ass woman of 33 (remember this was back in 2013) had never learned how to ride a bike, all I’m going to say to you is this: I grew up in an island. My parents bought their first boat on the day of my first birthday. For the first 15 years of my life, I spent every single weekend swimming in the ocean. Every. Single. Weekend. Me? I’m a mermaid. Mermaids don’t need bicycles.

Anyway, back to the present. I didn’t get back on a bike till last Spring, when I bought my first adult bike. I almost had to re-learn how to ride it. And I did, for the most part, but not before I fell and twisted my left knee. Twice.

Fast forward to last Wednesday, when I was feeling a lot more energized than the day before. I walked for 30 minutes and started Betty’s hot abs routine. One of the very first exercises in this video is a lateral plank. I completed the first one with my right knee bent and resting on the ground, to accommodate for my very beginner level. Then it was time to do the same with my left leg. The second I tried to lift my hips, on that side, I pulled one of the hamstrings.

All of a sudden I HAD to take off my socks because they were making me incredibly claustrophobic, except I couldn’t bend my leg so I could reach my foot. I couldn’t breathe. There I was, lying on the floor, having a mild panic attack while thinking I wasn’t going to be able to stand up. I started going through the list of reasons why I’m the most stupid person ever: ‘You haven’t stretched in a while!’ ‘You don’t drink enough water!’ So I started stretching as best as I could and, once I was able to get off the floor and pour myself a big glass of water, I downloaded Plant Nanny. 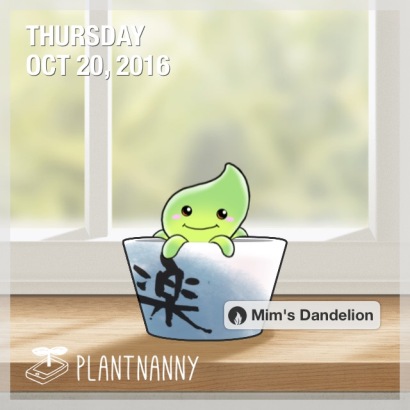 Meet Mim’s Dandelion. Hopefully, I’ll drink enough water to prevent my dandelion from dying. According to this cute little app, based on my weight, I need to drink 104 ounces of water each day. Let me save you the trouble of doing complex math – that’s the same as fourteen 8-ounce glasses of water, seven pints, or four 30-ounce water bottles. I keep changing the glass size to make the task seem less daunting.

As of today, 90 ounces is my absolute best. After 90 ounces I’m still thirsty, but my stomach can barely take another drop.

Day 10th (October 20th) – My leg was sore, and now my bicycle knee was hurting as well. I decided to take it easy, and spend the evening ‘working’ at The Taste of Greenwood Village. I’m happy to report that I was a VERY good girl, and controlled my eating impulses. It was really a fun night.

Day 12th (October 22nd) – Oh, GLORIOUS day… It’s my birthday! And as such, I got pampered all day long. Had my nails and hair done by none other than D, and managed to do even more shopping. In the evening, I had dinner and drinks with some of my Denver friends at Sushi Hai. It was the perfect day!

Day 13th (October 23rd) – My knee still hurt. Wearing heels the night before was probably not the smartest idea, but I needed to look sexy on my birthday. It’s mandatory! I didn’t exercise, but I walked a lot as I searched for the perfect chili. 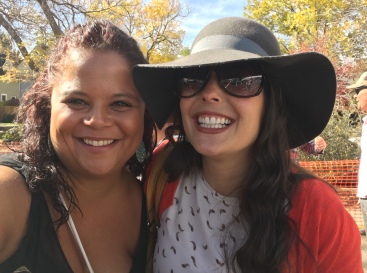 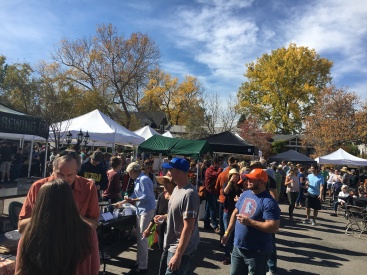 That day my family took me out for my birthday. We went to Joy Wine & Spirits Annual Chili Cook Off. It was so much fun! Both amateurs and local restaurants put out their best chili recipes, all for a very good cause. The food was great, the weather was nice, and the company was the best in the world. It was the perfect ending to a perfect weekend.

The week brought on some other things that I want to think on and savor. It may not have been the most perfect week fitness-wise, but it was rich in love and meaningful experiences. I’m choosing to hold on to those and let the positive win.

How about you? How was your week?